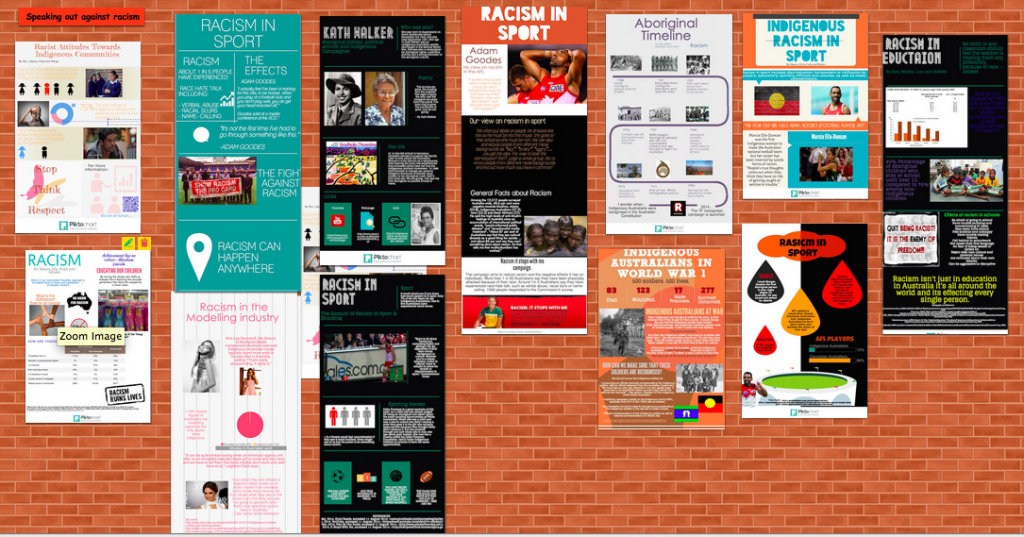 Active participation in this learning unit will give students experience in digital forms of communication- a shared group wiki, etherpad and Picktochart. It will involve learning appropriate online behaviours and limitations as students engage in a collaborative activity with another English class at Wilderness School.

What new information did you learn about racism and indigenous issues?

I learnt that indigenous issues weren’t only about ownership of land and the stolen generation but also affected the education and basic rights. Everything they did was been questioned just because of their race and we were discriminatory towards the Aboriginals in a very unfair way.

I learnt that even after fighting in World War Two Kath Walker still experienced discrimination from people around her. Meaning that back in the 1930’s people were still very one sided, even though Kath had served their country, that still wasn’t good enough for them and it was ok for them to treat her with such disrespect when they would treat someone else just like her, who fought in the war differently. It was like they were saying that she was not worth as much as others. When everyone should be equal to one another.

What did you enjoy about collaborating with others using ICT to connect?

As my partners worked hard during their lesson time, it was really exciting to realise during lesson time that things we’d wanted to complete had already been completed by the other class leaving us with a reasonable workload. It was exhilarating to realise how much faster we progressed with the help of teammates and because of this, our task progressed at a quick rate.

I enjoyed being able to set each other work. After every lesson we would make a check list of everything that each group member still needed to do. This was the same with the other class. This way we could stay on top of everything so we didn’t forget to do anything. I also enjoyed sharing our ideas on the collaboration and then writing up the proper copy of our ideas on the four Wiki pages.

What was difficult or annoying?

I think that the difference in timing between classes was very difficult to deal with as during a lesson I’d write my ideas then during my partner’s lessons they’d write their own ideas. Then in my second lesson where we should’ve already progressed to research, we’d still be thinking about probable topics. I think when using collaborative tools it is very important to accept all ideas and use as much as possible as there are limited amounts of time to communicate and brainstorming too much can prove to be a hindrance to the task.

Yes, I believe it was difficult in some areas. When you needed to share an idea with all group members or ask them a question you had to wait until their lesson to get the reply, meaning the task took longer because things could not be communicated quickly. It was also difficult to work the inforgraph at first because I had never made one before.

How could this collaborative task be improved?

I think while sending mails back and forth is useful, it’d be good to dedicate one lesson to collaborating at the same time to get some of the main points covered and cleared up between group members. Sometimes, even the topic becomes compromised if the meaning has not been made clear through messaging. I believe that this task was successful because of the willingness to accept new ideas from our other group members in the other class and ability to carry out the task efficiently.

To improve this collaboration we could have had one lesson with the other class so we could clarify what needed to be done and things like that. Another that that could have been improved is that we could have been showed how to use the Piktocharts before starting the assignment so we could get straight on to it, instead of having to use trial and error.